Sense the Quality, Sense the Future

Diesel-powered vehicles may give a negative impression related to air pollution such as photochemical smog since they discharge large amount of pollutants. On the other hands, diesel vehicles have become popular for commercial cars because of acceleration response by strong torque and good economic efficiency by fuel-saving performance.
While reinforcement of emission regulations spread worldwide, the technology that has been developed for coexistence of natural environment and diesel vehicles is a Urea-SCR system, which currently attracts attention in the market. SUN-A’s urea quality sensor monitor the urea water in the exhaust after-treatment processing system and play the role to properly function the system.

The Urea-SCR system is an exhaust after-treatment technology to cut NOx pollutants from exhaust emissions by using urea aqueous solution. The system takes advantage of the principle that converts the nitrogen oxides(NOx) in exhaust emissions back into harmless nitrogen and oxygen molecules by chemical reaction with ammonia(NH3). SCR stands for Selective Catalytic Reduction.
The Urea-SCR system was first brought into practice in Japan and employed to deal with diesel engine trucks in anticipation of Japan’s 2005 new long-term emission regulations. Since then, Urea-SCR technology has been globally developed and began to be integrated into the heavy-duty diesel engines along with the introduction of regulations worldwide.
Nowadays the Urea-SCR has been characterized as the mainstream technology for exhaust after-treatment processing system for heavy-duty vehicles. 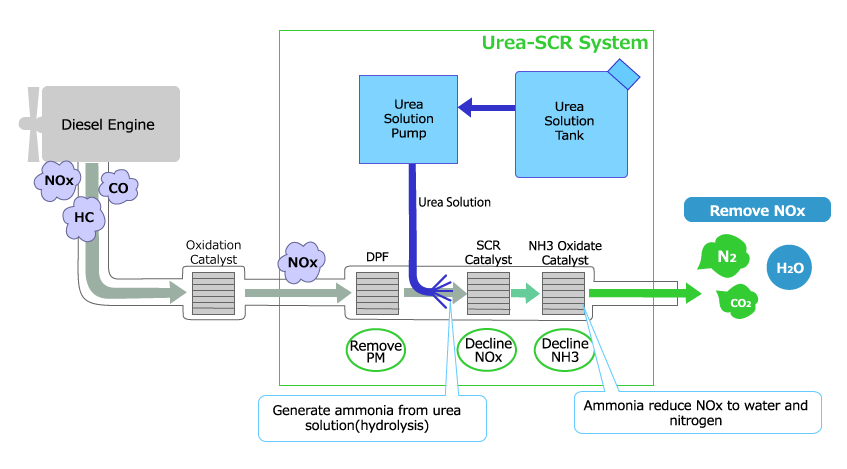 The role of urea quality sensor in SCR system

Emission regulation at home and abroad